The oldest race in the world outside of Hawaii and the only one below sea level!

Five reasons to race Challenge Almere-Amsterdam:
1) When you race Almere, you’re part of triathlon history
2) World’s only race below sea level
3) First or last: you are welcomed as a hero in Almere
4) Fast flat course: the only rivals are the winds and yourself
5) Beautiful contrast between endless polder roads and urban buzz with thousands of spectators

The Almere course is the world’s only long distance triathlon course located below sea level on reclaimed land at the bottom of what was once the Zuiderzee (South Sea). Almere is just 25km from the Dutch capital of Amsterdam, one of the most famous cities in Europe. Still surrounded by water, the course features the typical Dutch landscapes renowned the world over – dikes, windmills, tulip fields and endless straight, fast roads where the battle is between you and the elements.

The start and finish of Challenge Almere-Amsterdam will take place in the heart of the Almere’s city centre, on the Esplanade, an area renowned for its culture and futuristic architecture.

The two-lap swim takes place in the Weerwater, adjacent to the Esplanade. The name means ‚water again‘, as this lake was dug after the city of Almere was reclaimed from the Zuiderzee, bringing the water back.

The bike course will take athletes through the province of Flevoland, racing along the former Zuiderzee seabed, between dikes and windmills. The run course features six laps of 7km through the city of Almere, alternating between modern architecture and calming nature and green spaces surrounding the Weerwater. 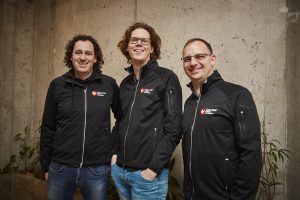 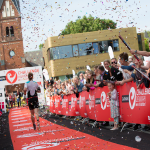 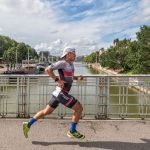