Moscow, on the Moskva River in western Russia, is the nation’s cosmopolitan capital. In its historic core is the Kremlin, a complex that’s home to the president and tsarist treasures in the Armoury. Outside its walls is Red Square, Russia’s symbolic center. It’s home to Lenin’s Mausoleum, the State Historical Museum’s comprehensive collection and St. Basil’s Cathedral, known for its colorful, onion-shaped domes.

CHALLENGEMOSCOW is a Middle Distance race, taking place in Russia, Europe. The race starts with the swim part in the Grebnoy channel. This rowing canal was built in 1972-1973 to host the 63rd European Rowing Championships. In 1980, the canal hosted rowing and kayaking and canoeing competitions as part of the Summer Olympic Games.

The cycling stage passes through the center of Moscow. Athletes will pass iconic bridges and embankments, a museum, historic buildings and modern buildings of the last century. The run course of the race will lead the athletes along the Moskva River. Eventually, athletes will finish in Gorky Park, the central park of the city with large fountains and views on the Moskva River. 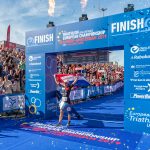