A magnificent scenery combined with a late summer day was the perfect backdrop for the challenging course at CHALLENGEDAVOS Festival. A refreshing swim and quite a bit of altitude difference on the bike and run course awaited athletes on all distances. The 2019 CHALLENGEDAVOS Champions are Radka Kahlefeldt (CZE) and Pieter Heemeryck (BEL).

What a day! With sunshine, clear blue sky and temperatures around 22 degrees, weather conditions were perfect. The mountain lake in Davos was refreshing but with mandatory wetsuits warm enough for the full swim distance so that the around 500 starters were able to complete the race they came for. Spectators lined the shore of lake Davos for the start.

A big pack of men came out of the water together including Ruben Zepuntke, Horst Reichel, Pieter Heemeryck and Ruedi Wild and made their way towards the Flüela Pass. The unusual bike course, which has almost no flat sections, led the athletes from the west side over the pass that separates Davos from the Engadine and after the turning point at its east side once again up the pass and back to Davos. Quite a few athlete chose the road bike for this race as it is lighter and easier to maneuver on the downhills.

The former professional cyclist Ruben Zepuntke (GER) demonstrated his cycling skills and was able to take a minute on each ascent and three minutes on the downhills from Pieter Heemeryck in second place. In the women’s event, a duel between Radka Kahlefeldt (CZE) and Emma Pallant (GBR) was expected. Kahlefeldt knew that she would have to lead off the bike if she wanted a chance to win. She was able to put this plan into action and had seven minutes on the second Emma Pallant starting the run. Knowing that the gap was too big Emma Pallant took it fairly easy and only gained only 30 seconds on Kahlefeld on the run who was more than happy with her performance. “Amazing, just amazing” Kahlefeld gushed after the finish. “On the bike course I pushed really hard and I think that on the downhills I gained a big part of my lead. With a seven minute cushion, I could even enjoy the run, although I tried to consistently push the pace.”

Pieter Heemeryck was second at the two previous CHALLENGEDAVOS events. On the running course he left no doubt that he would not miss out on another win. At kilometer 11 he took the lead from Ruben Zepunkte and could immediately put some distance between him and the shooting star from Germany who suffered hard on the last ten kilometers and was also overtaken by Albert Moreno Molins. Heemeryck took the win with the best running time (1:11h), one and a half minutes ahead of Moreno Molins. “Five minutes behind Ruben after the bike were a lot. Luckily, I had really good running legs today. When I overtook him, I was pretty sure that I could win here today.” said Heemeryck on the finish line.

Aside the middle distance, CHALLENGEDAVOS Festival offered a side events for everyone – a NightRun, olympic and short distance triathlon races and a Swim&Run for kids. Everyone could get involed and enjoy the beautiful scenery and the amazing weather in Davos.

Learn more about the CHALLENGEDAVOS Festival 2019: 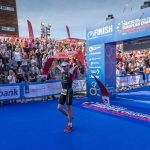 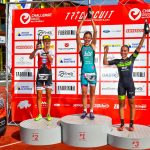 Radka Kahlefeldt closes in on the lead in the CHALLENGEFAMILY World Bonus after victory in Davos, Pieter Heemeryck strengthens his leading positionNews
We use cookies to ensure that we give you the best experience on our website. If you continue to use this site we will assume that you are happy with it.Ok