Hello! Greetings from Daytona, Florida the U S of A

This postcard got a little delayed in the post over the Christmas festivities, but it’s another good one, as it comes all the way from the International Speedway at Daytona Beach, Florida, the USA!

In its second year of running, Challenge Daytona incorporates a whole host of events for everyone, from the Junior Challenge, to 5km and 10 km runs, Duathlons, Aquabikes, as well as Sprint and Middle Distance events. For the Pros it’s the Daytona Distance Under Lights event that takes place at dusk, as well as the fun filled Pro-Am Relay. But more to come on these later.

Daytona International Speedway, the home to NASCAR racing, the self proclaimed, World Centre of Racing, consists of a 2.5mile / 4km tri-oval lap. The corners are banked at 31deg and the straights banked up to 18deg. There’s also a 6.13km (3.81 mile) road course, that takes the drivers inside the tri-oval, as well as a few more variations on this, allowing for Supercross motorbike events as well as karting and more.  The Speedway even has its own lake, Lake Lloyd. This was formed as a result of the earth being dug and removed to be used to build the banking of the track, and then with the water table level in the area, resulting in the subsequent hole filling with water. The lake became permanent, and has hosted powerboat races and fishing events, but also means it’s a perfect location for a traithlon.  Also, at the Speedway are all the RV parks. This is where NASCAR fans drive in, in their ridiculously massive RV’s and camp there for the whole week perhaps before a race, creating a unique and festival atmosphere.

Fun Facts: When the speedway was built, for three years, 1% of the USA steel supply went into the Speedway. Loads more fun facts to be had, which I’ll tell you when I show you round the track next year! Ha Ha!

Last year, due to adverse weather hitting the race, the race was adapted for the Pros, to be completely within the speedway, and was such a hit that they kept the format this year. A 1.6km, 2 lap swim, with Aussie exit in Lake Lloyd in the centre of the track, before 15 laps around the 2.5mile / 4km lap, and then onto a 8mile / 13km run again on the track and around the speedway. The finish line in front of the main stand, with awards at Victory Lane, just like the speedway races itself. That’s pretty special. 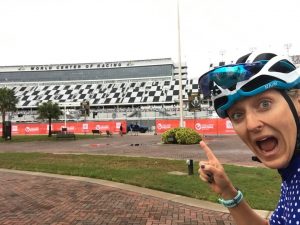 It was a super fun and a completely different concept and a style of racing that I’d not experienced before. It’s almost the closest I’ll ever come to racing ITU I feel, with the shorter format, and against the other women who were racing, but also the fact that the Pros were racing on their own, later in the day and just in front of the athletes.

We were racing at 4.30pm, into the night, as the sun set and the lights came on, on the Speedway. Daytona Distance Under Lights. It was pretty awesome. As mentioned in my last postcard from Cape Town, it’s been a pretty mixed year particularly the latter half since breaking my collar bone and I’ve struggled to come back to form. That mixed with the end of season and the line-up of women racing, it was going to be difficult to be on the podium. However, there was an end of season element of fun about the race, with the format and timing, and I was certain to make the most of the event and enjoy it. As well as the fact that the energy and enthusiasm from the Challenge Daytona team was infectious and you could not help being carried along with the excitement and just wanting to have a great race. 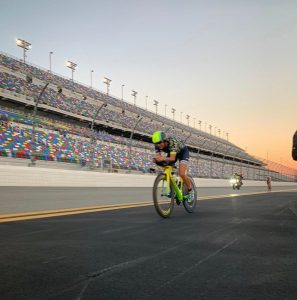 Challenge Family Daytona Distance Under Lights What an awesome experience!

With a bit of work to do after the swim, I set about on the race track. I felt I was making pretty good progress, but the top women were flying. Lucy Charles-Barclay had been leading out the swim as always, but had been chased down by Lisa Norden and Paula Findlay. Meredith Kessler holding strong in fourth, and I moved up to fifth. The leading three women all started the run together, but soon it was just Findlay and Charles-Barclay running side by side. These two were neck and neck till Canada’s Findlay managed to break away around the half way mark, taking her to the win!

It was cool finishing in the dark, down Victory Alley at the Daytona Speedway. Such a buzz and a really amazing race and experience. Thanks to the Challenge Daytona team and the Internatioanl Speedway.

In the Mens race it turned out to be epic foot race aswell, between Canada’s Lional Sanders and Spain’s Pablo Dapena Gonzalez. Sanders only breaking away in the final few kilometers to take the win. Another impressive performance was from Andrew Starykowicz who averaged over 30mph (48/49kmph) for the 60km bike leg, coming into T2 in first, and ending up finishing in fourth, behind Jason West. 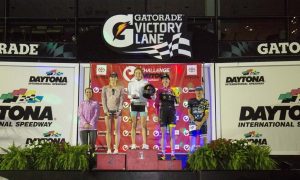 There was a lot more about Challenge Daytona that made for an aweseome event weekend. For a start we had the Pro-Am Relay on Saturday morning. Athletes had been able to bid to be the cyclist and running in a relay team, with a Pro athlete as the swimmer. As well as the opportunity to be in a relay with one of the Pro’s and meet some great people, it was importantly to raise money for the NASCAR Foundation. 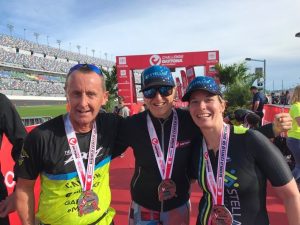 My awesome team mates for the Pro-Am Relay – Paul Chard (runner) and Courtney SSSSS (cyclist). Also big thanks to my sponsors Deboer and Hoka for the awesome goodies they supplied to Paul and Courtney, as well as Velosock for giving them a custom Velosock!

We would be swimming 800m, then hand over to our cyclist for a 20km bike around the speedway and then onto our runner for a 5km run. I was lucky to be joined by Courtney Cappello and Paul Chard, who were the succesful bidders for my relay team! What a blast it was! So much fun to be part of a relay with Courtney and Paul. I was defintely the weakest link in the team with my swim, but Courtney had a ripper bike to hand over to Paul, who put in a speedy run to pull us back up the field. The best bit was waiting for Paul to step onto the carpet, so that all three of us could run down the finish chute together as a team. A big thank you to Courtney and Paul for being such fun and fab team mates. 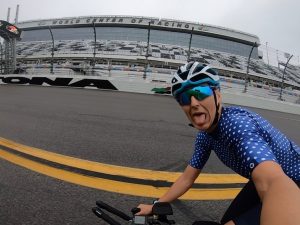 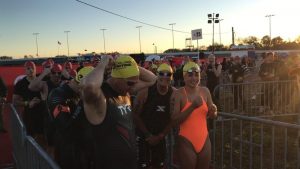 The day after the Pro Daytona Distance Under Lights, it was the Age Group Middle distance race, and was great to be able to suppor the age groupers racing. This race started with a 1 lap .19km swim in Lake lloyd, followed by a 90km bike, that took in two and a bit laps around the track before heading out of the Speedway and exploring some of the local Daytona roads. It culminated back in the speedway in T2, with the run taking place wholely in and around the track.  I was also able to join a relay team in this event, and so got to experience another race in Daytona and again the comeradery of the team racing. 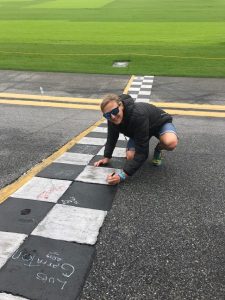 There is so much for the family at this event as well, which is great with the time of year being so close to Christmas. Not only is there a kids race, but also a 5km and 10km run that welcomes everyone.

With it being the festive period, the Speedway was all lit up with Christmas decorations and light displays that you could drive through – The Magic of Lights, Daytona! The other awesome opportunity was a fast lap on the track in a car. Now I know we weren’t going anywhere near the speed that the drivers go in a race, I think they hit around 200mph ++, but on my first lap we hit 125mph and were going to go faster on the second lap, but started catching the car in front, and so unfortunately had to slow down a touch. It’s mental though to think that whilst I was just one or two cars going around the track, in a race there’s more likely 40 cars, and they will speed around the track, four abreast, just millimetres between each other and the wall at the top of the track. 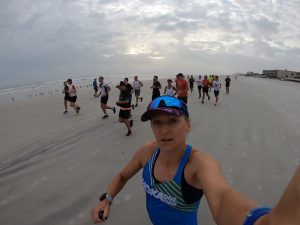 Daytona is also not too far from Orlando, Florida and Disney World. Therefore of course a plethora of options to keep kids and families entertained for days at the various magical theme parks there. As well as the famous Daytona Beach, which you can drive along, run or walk along or just enjoy the beach and ocean views.

Challenge Daytona was another awesome race in the Challenge Family Series. A unique experience and really great concept across the board from the Pro-Am Relay, Pro Distance Under lights, to the Age Group Middle Distance Race, and more. There was a real buzz at the race and a great opportunity for all athletes Pros, Age Groupers, kids and more to interact and hang out, be it via the fast lap or in the race expo area, and of course on Saturday at the end of the Middle Distance race where all the Pros were down at the finish line. The Awards, which also offer slots for The Challenge Family, The Championship, take place at Victory Lane, for everyone! So everyone gets to experience the similar feelings that the drivers do, standing on the podium in front of the stands! 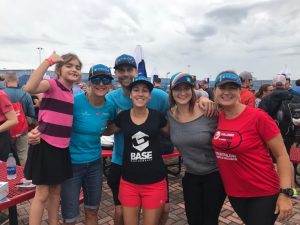 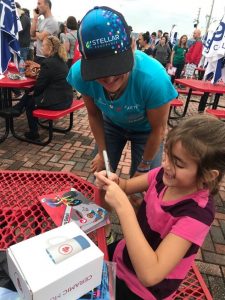 Loved getting the opportunity to meet some of the Age Group athletes racing and from local tri-clubs but also further afield. Even had one little champ sign her autograph for me!

The other great thing about Daytona, is the team is willing to listen to all the athletes and they are looking for the continuous ways to improve and make it better for the athletes, all the athletes. I love that, and love teams that genuinely engage with the athletes to find out what they can do differently, and how to make the race even better.

I’m excited about the concept and the whole race experience of Challenge Daytona and think there’s a great opportunity for more races hitting the USA in this way, over the next few years.

For now, I hope you all had a fabulous Christmas and wish you all a Happy New Year! All the very best for a strong, healthy and triathlon filled adventures in 2020! 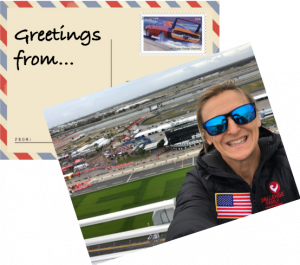