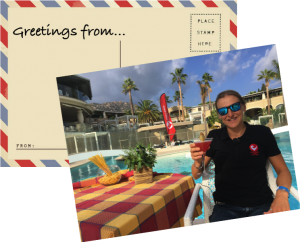 Wow Challenge Madrid. That is one incredible race! What I love about Challenge races, are that they are different from the ‘norm’, and Challenge Madrid is another race that fits perfectly into this. It’s unique that’s for sure and has so much variety and so much to offer. It’s fantastic. Add it to your bucket list! Nuff Said!

Challenge Madrid, a race that starts in the rural Spanish countryside of the Lozoya Valley, in the middle of the North Mountain Range (Sierra Norte), but finishes in the heart of the city of Madrid. Madrid is the capital of Spain, pretty much located in the centre of the country. It’s the third largest city in Europe, behind London and Berlin. Where the race is located, provides a huge variety of options and places to explore. Of course, there’s Madrid itself, but also the villages in the Sierra Norte. Buitrago del Lozoya, by the race start with its city walls, and Picasso Museum, horse riding and canoeing, but also some of the towns that the bike course goes through are great for exploring rural Spain – Miraflores de la Sierra and Rascafria, and Lozoya too. 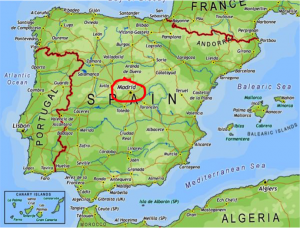 Challenge Madrid, was this year also the European Triathlon Union Long Course Championships, and as with many of the Challenge events, they had plenty going on for the family, with running and open water swim events. Next year also sees the race include a middle distance event, which looks to still capture the heart of the Sierra Norte and the city. I won’t lie, the Long Course race is tough, but that shouldn’t put you off. It’s a true and honest race, and a spectacular one at that. I don’t think I’ve ever experienced such variety from the start in the mountains to finishing in the heart of Madrid. 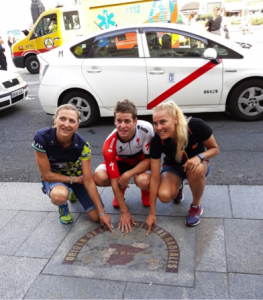 A busy street right behind, which is closed to become the finish line on race day.

The start of the race is about 75km outside of Madrid, at the Embalse de Roisequillo and the Area Recreativa de Riosequillo. It’s a beach start, that leads to a two lap swim. It is a pretty straight forward rectangle swim, and then a short run up the beach to transition. This is all carpeted.

The bike is a one way tough course. The first 80km in the hills of the Sierra Norte Park. Straight out of T2, you start to climb and gain elevation. There are pretty much four climbs in that first 80km, but three main ones. The main chunk of each of these climbs is 8-9km in length, with 1km markers giving you the average gradient, which varied from 2-7%. With each climb the elevation increases, 1500m, 1700m and then 1900m, and don’t be surprised if you see the odd bull or horse just at the side of the road casually watching and supporting you too! From 90km it’s back down to Madrid, although to be honest, don’t be fooled with it being down hill all the way. Oh, and there’s also a 500m cobble section too through one Rascafria one of the gorgeous Spanish towns the course goes through. It was great though, as it was pretty much a full road closed for the whole bike course. That’s impressive on a A to B, 180km course, but made for a great track to race on. The course brings you back to T2, which is just on the outskirts of Madrid, situated in Casa de Campo park.

Running round the Templo de Debod in Madrid

From T2, the run starts with about 8km in the park, before heading up to the city centre of Madrid for a four lap course. It’s another impressive feature of this race. You are running right in the heart of Madrid, past The Royal Palace of Madrid, around the Templo de Debod, through more parkland, then up and down Calle Major, past Plaza Major, finishing in Puerta del Sol at Kilometer Zero.

Puerta del Sol, is a little like Piccadilly Circus in London, so packed with tourists and activity. Kilometer Zero is where all radial roads in Spain start from. Again, an impressive set up to close all these roads right in the centre of Madrid for the race. Being in the heart of a city like Madrid is fabulous too as of course all the races supporters but also so many tourists and locals come out to cheer you on. It’s a great atmosphere.

It was my first time in Madrid. I always wish I had longer in the places I am fortunate to travel to, to explore and really appreciate the place and culture. Madrid certainly seemed like it would be fantastic place to stay for a few days longer.

With Challenge Madrid also being the ETU European Championships, it was an absolute honour to be representing Great Britain in this race. The last time I put on the Team GB kit, I was an Age Grouper in 2013, so to now represent GBR again as a Professional was pretty special. It was also great to be able to meet the Team GB Age Group athletes, who had also qualified to race Challenge Madrid, as well of course all the other athletes from different countries.

I love a beach start for a race and had a good lead for about 10m before Margie Santamaria shot past, at which point I tried to jump on her feet and failed miserably. However, three of us formed a chasing pack. Myself, Eva Wutti and Alex Tondeur. We exited the water about five minutes down from Santamaria.

Onto the bike and we set about attacking the hills! Tondeur was making us work hard as she made light work of the hills. I was loving the descents and speed. It’s really quite stunning riding on this part of the course. I managed to get away on the final descent, but still had some 90km to go of rolling terrain. However, by T2, I’d managed to build up a six minute lead.

Running past the Royal Palace of Madrid

T2, is in the Casa de Campo just on the outskirts of Madrid. The run course meant there were lots of opportunities to see the other women with, out and back sections and the four laps in the centre. There’s also plenty of opportunity to check out a few of the main tourist sites in Madrid! At the start of the marathon I was holding the gap back to Tondeur, Wutti having dropped back a little further. Lisa Roberts, whilst had started the run almost 20minutes back, was now quickly erasing that and catching and passing many of the women in front of her and over the marathon would move herself up into third. I could see over the second half of the run that Tondeur has started to eat into my lead too, and it was likely that she’d catch me in the final few kilomoters of the race! A sprint finish between us was looking likely, unless I could find another gear. For much of the final lap or so I struggled to find that gear, and Tondeur was getting pretty close. However, as the kilometres ticked away and I got closer to the finish line, and Tonduer hadn’t yet caught me, I managed to find something extra to up the pace and carry me to the finish line, in the lead, taking the ETU Long Course Championships. 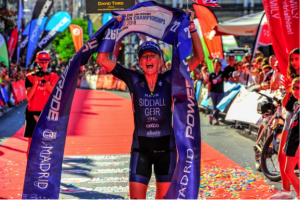 It was an incredible feeling to run up Calle Major the main street in Madrid, to Puerta del Sol, and km0, and the finish line, and to take the tape as European Long Course Champion. Alex had pushed me all the way, and she finished just over two minutes behind. Lisa Roberts had a great run to run herself into third. 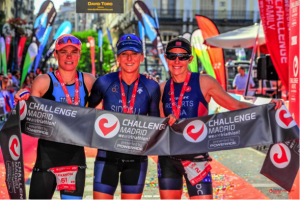 Congratulations to Alex and Lisa for the podium, and to Eva Wutti who finished fourth but was the third European so third in the ETU Champs. With it being a Championship event, I also got to stand on the top of the podium whilst they played the National Anthem, God Save The Queen. This was incredibly special and I think it’s always moments like this in sport that we remember. I know I certainly will. 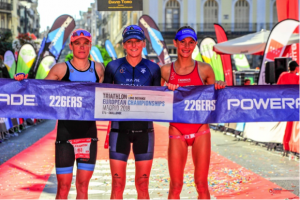 Congratulations to Alex Tonduer and Eva Wutti for rounding out the podium in the ETU Long Course Championships.

What an incredible day. What a finish line too in the heart of Madrid. It was awesome to return for the final hour to welcome home the last finishers and to party with the Challenge Madrid team at the finish line. I would highly recommend Challenge Madrid. It’s a challenge, that’s for sure and we need more races like this around the world. Don’t shy away from the challenge, but step up and embrace it. The finish line is sweeter when you have a course like Madrid. 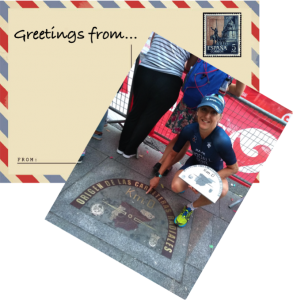