Set right in the south of Sardinia, in the Forte Village resort, this race is perfect for a family holiday combined with the race. Being late in October too, it’s an ideal end of season race and celebration of the last bit of summer sun, before the winter months set in. It’s easy to get to as well flying into Cagliari airport direct or from connecting flights from the mainland. 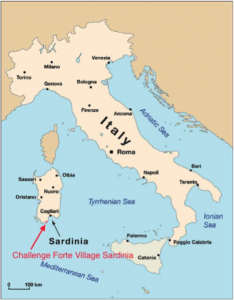 Swimming off the beach at Forte Village, before leaving the resort for a one loop bike course around the gorgeous Sardinian countryside. There are a few climbs and some fast descents, as well as some flatter sections and drags. The last 20km is one of the most spectacular as you hug the Sardinian coastline, the ocean crashing against the cliffs to your right. It’s pretty amazing. The run course is two laps along the coast, with a rolling path returning to Forte Village after each lap and then for the finish line and a spectacular stage and atmosphere.

Another great event for all the family, with a sprint distance event and kids races on Saturday, and a Challenge Women 5km walk on Sunday, during the middle distance event. But there’s so much going on at Forte Village every day, with all kinds of sports and activities, there’s something for everyone. 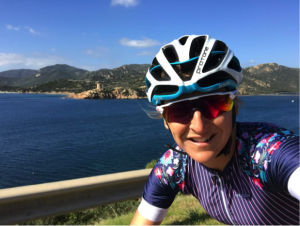 Taking in the gorgeous bike course.

The swim is off the beach in the ocean. Last year it was a two lap swim with an Aussie exit between laps. This year it was one lap, swimming out and then along the beach and back. It can be relatively shallow for a lot of the way too. Unfortunately though in the day prior to the race the wind and swell got up and the decision (the right decision) was made to cancel the swim early on race morning. As a result for the Pros the swim was replaced with a 5km run. For the Age Groupers, a Time Trial bike start. This was due to the logistics of managing a split transition. They were able to move shoes from T1 to T2 for the Pros but it would be too difficult for all the Age Group athletes, if they had started with a 5km run too. I have to say, with the last minute changes, the race team was incredible well organised and managed the whole situation really well.

A one lap bike course takes in some stunning scenery around Sardinia. It includes a decent 10km steady climb followed by a fast, technical descent. There are some flatter sections too, before the last 20km takes you along the Sardinia coast. This is spectacular with the ocean right there to your right, as you navigate shorts hills and descents and turns along the coast.

T2 is back at Forte Village but in a slight different location to T1, which was down near to the beach.

The run is two laps that starts along the road before turning down the coast and again hugs the water front coast line. It’s relatively flat but has some slight gradients to navigate. At the end of each lap you come back into T1 and past the finish line, which creates great atmosphere from all the spectators and supporters waiting for the finish.

It’s another of my favourite races and one I really would again recommend! A great pasta party kicks off the event, well we are in Italy and the home of pasta, and the food in the resort is truly great. The awards ceremony was like nothing I’ve ever seen before with a Military band (they actually played on race morning too), and then singers and dancers entertaining, before the official proceedings got underway.

I’m very pleased I made the decision to return to race Challenge Sardinia in 2018. It was a great way to finish off my year in a gorgeous and relaxing location. The staff and team at Forte Village treat you like royalty and their service is so high, you are truly spoilt!

Challenge Sardinia would be my last race for 2018, and my last race that could count towards the Challenge Family World Series. I was sitting in second again, just 50 points behind Yvonne Van Vlerken. A top two finish in Sardinia would see me draw level or move ahead and be up for the overall win. Something I believed and felt was achievable.

Having raced two full iron distance races in the last five weeks, I wasn’t hugely excited about the prospect of an additional 5km run at the start of the race, but I was feeling pretty good in the week leading into the race, so wasn’t overly worried and would just deal with things as they played out. 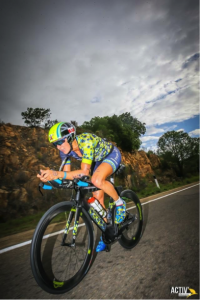 I actually felt really comfortable in the first run, sitting at the front of the group. I don’t think the pace was particularly fast but this also meant it didn’t really break up the field, resulting in most of us coming into T1 together. Whilst swimming isn’t my strength I was actually looking forward to the ocean swim.

On to the bike and a couple of us moved to the front setting the pace and soon a group of five broke away from the rest of the women.

As with Madrid I was able to get away from the other women on the descents, but unfortunately wasn’t able to capitalise on these gaps on the flat, hoping just that it was hurting the other women to catch back up. The lead swapped a little between myself and Katrien Verusfyt, who actually nearly got away but I managed to get back up to her and again move into the lead, as we hit the coast line section. 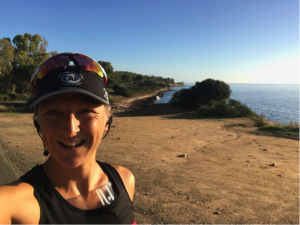 Whilst again I could gain some time and gaps on the descents and corners, I couldn’t quite then break up the chasers on the climbs, which meant I lead a group of five of us in to T2. First out on the run, and I was now just hoping the run legs would come to play. A couple of the women set off pretty fast and moved infront of me, although they didn’t gain huge distance on me to start. However of over the first few kilometres, all the women over took, and at just over 2.5km, my right hamstring started to cramp. A totally new experience for me, resulting in me walking briefly. But stubbornness kicked in and I was refusing to walk. Again if I didn’t let the women get too far ahead, perhaps my endurance and strength would come through in the second lap and I could move back up to the front of the race. 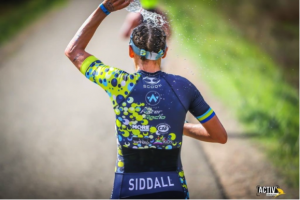 Sadly it wasn’t to be and whilst I caught back up to forth and we ran together whilst we both went though a rough patch, I wasn’t able to make in roads into the three women in front. Clearly they did have the better run legs on the day.

So unfortunately for me it was a fifth place finish. Not a bad result, I mean not a complete disaster but definitely a performance I didn’t want to finish my year on, as well as the fact that I’d now let the Challenge Series win slip away and it alluded me for another year.

However, it was great to be at the finish to watch two friends, James and Amy finish the race. Congratulations to the women’s podium and to everyone who finished off the year in style at the gorgeous Challenge Sardinia.

For me that’s the last in my series of postcards from… although sadly perhaps for you, not the last you’ll hear from me with a few more words to be written about my European Adventures! 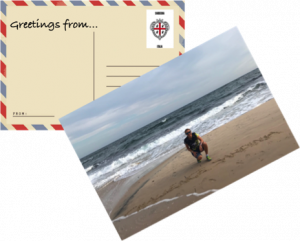